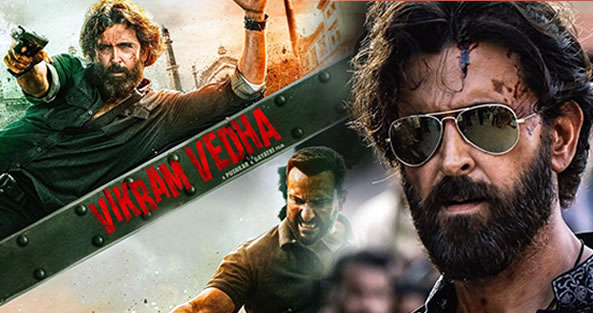 MOVIE RATING
The Hrithik Roshan and Saif Ali Khan-starrer is a remake of the 2017 Tamil-language neo-noir action thriller hit film Vikram Vedha, which had Vijay Sethupathi and R Madhavan in those roles respectively. The Comparison between both original and remake of Vikram Vedha was unavoidable but Pushkar and Gayatri directed movie manages to stand well on its own, delivering a taut plot, remarkable action, and appropriate laughs.
About Vikram Vedha Story: Vikram Vedha is roughly based on the legend of Vikram-Betaal. Vikram (Saif Ali Khan), here, is an officer in the Uttar Pradesh Police STF while Vedha (Hrithik Roshan) is a gangster who lords over Lucknow. In their cat-and-mouse game, Vikram comes face to face with Vedha thrice. But every time, a riddle posed by Vedha forces him to re-evaluate what is right and wrong. Each of the answers also helps him solve a case he is working on. However, when Vedha surrenders himself to the police, and starts narrating stories to Vikram, it alters understanding of good and evil.
Actually, the film has been written really well. The directors, Pushkar and Gayathri, also the writers of the movie, make it a point to leave the story’s flow to the two central characters after establishing them properly. Vikram and Vedha’s parts have been written with a kind of finer detailing that works at so many levels.
In terms of implementation, the movie offers a freshness and entertainment quotient. The action scenes have been choreographed really well. The use of Lucknow as a location is quite good. The film’s music album is OK. The Alcholia track becomes instant hit and it is necessary for establishing the character. Evil guys are naturally more enigmatic. But Pushkar and Gayatri’s script makes sure Vikram gets his due too. It gives equal importance to the both characters, not letting one overshadow the other.
Abou the performance, the movie inclines towards Vedha’s character, which has been performed outstandingly by Hrithik Roshan. He acts well in his threatening, ruthless and emotional avatar. He’s easily convincing as Vedha. On the other side Saif acts efficiently in an honest cop avatar, who thinks he knows what’s right and wrong. He embraces the character’s inner strengths, vulnerabilities and shows the gradual change in his thinking really well.  Radhika Apte and Sharib Hashmi are versatile and capable in their acts. Radhika Apte reprises Shraddha Srinath’s role, doing a good job of the ‘vakeel’ who plays footsie with her cop spouse. The supporting actors as Vikram’s colleague and good friend Abbas (Mishra), Vedha’s younger brother Shatak (Saraf) and his dear friend Chanda (Bihani) are capable in their acts to support the plot.
Pushkar-Gayathri’s Vikram Vedha works as both a thriller and a masala action film. It is entertaining and even manages a few whistles and claps in a packed hall. Pushkar & Gayathri step up with the Hindi version maintaining all the mass masala and adding multiple layers of technical bravura over it.
Overall, film Vikram Vedha is praiseworthy to watch once for its mass entertainment quotient with Hrithik Roshan and Saif Ali Khan’s astonishing transformation for the character.