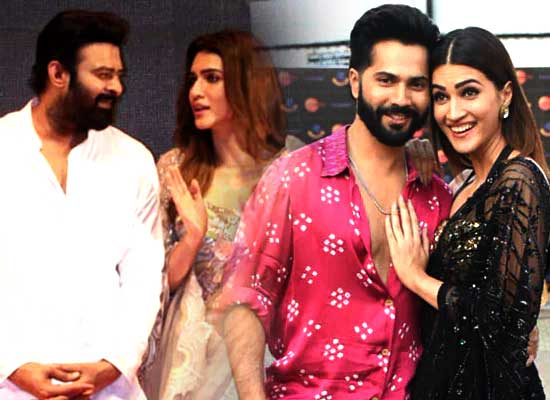 Bollywood's well-known actress Kriti Sanon has slammed her relationship rumours with Prabhas. The pair is all set to be seen in Om Raut's Adipurush.
Lately, Kriti's Bhediya co-star Varun Dhawan verified on Karan Johar's dance reality show that she is dating Prabhas. A while ago, the actress took to Instagram and shared an official statement. Kriti called her relationship rumours with Prabhas 'baseless'. In her clarification note, she also said that 'Bhediya' Varun 'went a little too wild' and his fun banter led to dating rumours. Kriti's note read, "Its neither Pyaar, no PR... our Bhediya just went a little too wild on a reality show. And his fun banter lead to some howl-arious rumours. Before some portal announces my wedding date- let me burst your bubble. The rumours are baseless!" She also put 'Fake news' GIF along with the statement.
A video from Jhalak Dikhhla Jaa went viral on the social media platforms in which Karan was seen asking Varun why Kriti's name was not mentioned in the list. To this, he answers, "Kriti ka naam isiliye nahi tha kyunki Kriti ka naam..." Kriti interrupted him but he further continued, "kisi ke dil me hai." Karan then asked Varun to reveal the name. He revealed, "Ek aadmi hai jo Mumbai me nahi hai, vo iss waqt shooting kar raha hai Deepika (Padukone) ke saath." It was quite obvious that the person is Prabhas since Deepika is presently busy shooting for Project K. Soon after Varun made the disclosure, Kriti was seen blushing.